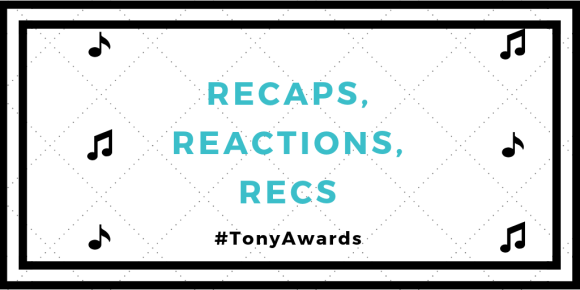 We texted each other during the entirety of the Tony’s (and to be honest, for a few hours every day about our theatrical obsessions with text-based analyses). To share our mutual nerdiness with all of you, we have compiled a recap of the performances of musicals and presentations of playwrights you might have seen (or missed) at the 2019 Tonys along with several book recommendations to be paired with each!
But first, let us introduce ourselves:
Olivia is a pre-service secondary English teacher who writes middle grade and YA in her spare time. A lifelong theater-goer and choir-singer, her obsession for live performances have grown recently and she has become involved behind the scenes of some undergraduate productions at her university. She blogs at Books and Big Ideas, is too active on Twitter, and spends about as much time reading critical analyses of various media as she does consuming them.
Taylor is an ace scholar of media and culture. When she’s not geeking out over the latest queer YA, a new type of yarn she found to knit or the latest episode of Chopped, Tay is working on her queer romcom about cupcakes, musicals and learning how to fall in love, Ace of Cake. Based in New Jersey, she also goes to Broadway shows entirely too often, but is kind of obsessed with the feeling of settling into a plush velvet theater seat and waiting for the curtain to rise. You can find her on Twitter or her blog, Stay on the Page.
Olivia and Taylor also record a podcast, Culture Popped Open, where they dissect their favorite pop culture obsessions–including musicals. You can find updates and more information at their Twitter and Patreon.

Ain’t Too Proud: The Life and Times of the Temptations – This jukebox musical chronicles the, well, life and times of the Motown hit group The Temptations with all of their smooth harmonies and synchronized dance moves (winner of Best Choreography!). Check out these books featuring African-American musicians:

Beetlejuice – This weird, kitschy postmodern musical is about a dead couple who employ the services of a summonable bio-exorcist and shenanigans (set to music!) ensue. Here are some creepy YA and crossover horror books about ghosts, demons and more that will give you the same vibe as this eccentric and spooky musical:

Tootsie – Okay, we admit we’re a little biased on this one…Tootsie is based on the movie of the same name from 1982, which does comment on the sexism in the workplace, but…now we all are more aware it exists. Instead, this version takes place in 2019 on Broadway (instead of a soap opera), and it tries to address this, but apparently still makes a lot of jokes about what’s really under Dorothy’s dress (and won the Tony for Best Book, ugh). (Here is a good article that discusses the broader implications of its take on cross-dressing/drag, too. This is also good and has examples of the jokes.) Besides, the introduction at the Tonys said that this was about a (white, cis, straight) man who is told he won’t work as an actor when turning 40 and someone gets more success as a woman??? In what universe?? Frozen on Broadway star Patti Murin had a fantastic comeback to that on Twitter. (Shoutout to a supporting performance by our fave Lilli Cooper, though!) So our recommendations are adjusted accordingly:

The Prom – In this energetic musical comedy, four egotistical washed-out former Broadway stars travel to a small, conservative Indiana town to help Emma, a lesbian teen who wants to bring her girlfriend to the high school prom (loosely inspired by the 2010 Itawamba County School District prom controversy). The adults are all highkey annoying, but the teens are adorable and the last two musical numbers soar (and there’s an epic kiss at the end!!!). Check out these other adorable YA prom books that feature queer teens dealing with the struggles of androgynous tuxes, PFLAG chapters, rainbow proms, and more.

Hadestown (Greek mythology reimaginings bonus if it has any of the characters in the musical) – The big Tony winner of the night with 8 wins including Best Musical, Score, and Director was Hadestown, the folk, and jazz-inspired, post-apocalyptic retelling of the Orpheus and Eurydice story, narrated by Hermes (André De Shields, Tony winner!). Go listen to the music, it will change your life. Unlike the original story, Eurydice has more agency and instead of dying chooses to work for Hades in his mines, giving up a free life in an uncertain climate for security with grueling work. Orpheus, believing in creating a more hopeful world through song, journeys down to Hadestown to bring her back…if doubt doesn’t come in. Check out these blends of myth, storytelling, love, fate, and social commentary:

Oklahoma! – OOOOOOOklahoma, where the wind comes sweeping down the plains…In this re-imagining of the genre-defining early book musical from Rodgers and Hammerstein, a group of frontier settlers plays out complex gender, racial and community dynamics through a re-orchestration of the original music. The musical shows Laurey William’s hesitant courtship by an arrogant cowboy Curly McLain and her family’s sinister farmhand Jud Fry, a love triangle that escalates in increasing heat and tension until the play’s final moments that reveal the faultlines of loyalty in this tight-knit community. Check out these books about Oklahoma and/or race:

Kiss Me, Kate – Cole Porter’s classic “golden age” musical was the first show to win an Antoinette Perry Award for Excellence in Broadway Theatre (aka a Tony Award) for Best Musical in 1949. The subject of multiple Broadway and West End revivals, the musical is about a production of William Shakespeare’s comedy Taming of the Shrew and the sparks that fly between the show’s director and it’s leading actress, his ex-wife. This rich musical is filled with extravagant classic dance numbers, NYC gangsters and commentary on theatrical production. Check out these books that feature teens doing theater in various forms:

The Ferryman – In this sprawling, messy, lyrical three-act play from Jez Butterworth that won Best Play and numerous other awards, the Carney family celebrates the harvest, but their festivities are cut short by betrayal and complicated politics surrounding the IRA and family loyalties at the height of the Troubles. This play about a Catholic family living in Northern Ireland in the 1990s asks difficult questions about loyalty to family versus loyalty to politics and finds its relevance to a contemporary American audience through those themes as well as an elaborate set and naturalistic dialogue. Check out these books, both fiction and non-fiction, about Northern Ireland, the “Troubles” and Irish mythology:

What the Constitution Means to Me – In this unconventional but witty and relevant one-act play, Obie-award winning and Tony-nominated actress and playwright Heidi Schreck revisits, revises And restates her experience as a teenager competing in national competitions about the US Constitution. Weaving memories of the competitions with sharp commentary on Constitutional law and stories about the five generations of gendered violence and trauma through the women in her family, Heidi provides a raw and honest look at a document that fundamentally does not protect we the people. With charming wit and a beaming smile, Heidi takes on issues ranging from rape to domestic violence to abortion in this deeply personal and riveting play. If this sounds great, check out these books about teenage girls who kick ass and initiate change in themselves and/or communities:

Gary: A Sequel to Titus Andronicus – In this bizarre and grotesque comedic follow-up to one of Shakespeare’s goriest plays, the remaining characters are left with the job of cleaning up…the gore. This play uses excess and vaudeville techniques to provide a darkly humorous look at class and art. Check out these unforgivingly funny and/or dark books along with another Shakespeare sequel:

Choir Boy (Performance, Playwright) – From the writer of the play that became Oscar-winner Moonlight, Choir Boy received a Special Tony for its music and impressed with its musical performance and McCraney’s speech. It follows a black queer boy’s journey in private school and serves tribute to the spiritual music history he belongs to. Check out these incredible books about music, black teens and private school dynamics:

Ink – We all knew we needed another play about white men in power. We needed yet another white male journalist story this season, apparently. They really broke the mold here. The play explores the rise of media mogul Rupert Murdoch in a play set in 1969 London against the backdrop of British populism as Murdoch acquires a struggling newspaper, The Sun. Check out some nonfiction about Murdoch or delve into some genuinely funny and diverse books about teenage journalists instead!