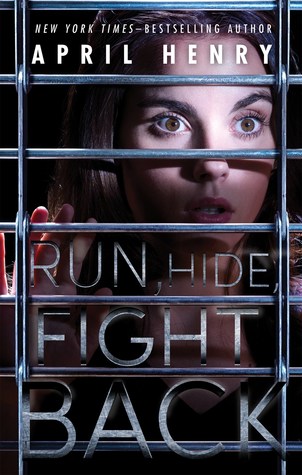 Hello everyone! So, as many of you know (and as you can clearly see in my banner), I absolutely love crime/mystery books; they are quite possible my kryptonite but in a good way lol. Therefore, when I found out Run, Hide, Fight Back* by April Henry, I was definitely interested in the mystery aspect of it all. I wasn’t too sure of how I felt about the shooting aspect of it but I figured I’d give it a chance and see if it was any good. After reading it, though, I have quite a few thoughts…. Before I get into  those/my (spoilery) review, though, here’s the synopsis, via Goodreads:

Six teens must band together to survive after a shooting breaks out.
When a deadly shooting breaks out in a Portland shopping mall, a diverse group of teens ends up trapped behind a store’s security shutter. To her own surprise, seventeen-year-old Miranda finds the others looking to her as their leader. But she’s hiding a big secret—and she’s not the only one. The group has only three choices—run, hide, or fight back. The wrong decision will have fatal consequences.

Seems like it could be interesting….maybe…and a little uncomfortable probably. Well, I thought tt was good, kind of. Like, I liked it for the most part (I think), I just did not care for quite a few parts of it. Here’s what I mean….

Characters (C-): it played off stereotypes too much and I was not fond of that. The main characters were a Mexican boy who wasn’t living legally in the US, a hijabi Muslim girl, a racist & Islamophobic girl and guy (the latter of whom is also a huge conspiracy theorist) who seem to quickly realize they’re wrong after talking it out and a boy who doesn’t treat his younger sister right but, after a tragedy, realizes he’s wrong for doing that. There is also a girl who has cancer but that’s not a stereotype. And just all of them together and the big discussions of being defending themselves and explaining why they aren’t living legally in the US, constantly discussing how people are so Islamophobic etc, all collectively seemed to be like just dumping diversity in for the sake of informing people about how they’re wrong and thinking they’re doing it right. Don’t get me wrong, I’m all for better-informing people but it just seemed so much and like it wasn’t done well and, all in all, just made the book a little ugh.

Writing (C): The good part though lied in how the book doesn’t read like a fully normal book as the chapters are relatively short because the book is about a shooting and, if you’re involved in one, everything feels fast-paced and slow-paced at the same time and I got that intensity through the book (which, tbh, overall the book made me feel a little uncomfortable for reading it because of the many shootings the US has gone through….more on this later though).

Another thing I didn’t really care for or really understand I guess was why there were two POVs. I mean, in the beginning, you get POVs from all the teens pretty much but then it all just fades out to Parker and Miranda’s POVs which confused at first because I expected the other characters’ POVs to show up but then it only switched between Miranda and Parker for the most part so that was eh.

Topic/Plot (?): Lastly, about the uncomfortableness so, when I was going through my ARCs yesterday and figuring out the order I wanted to read things, I was wondering whether or not I wanted to read RHFB. Before, when I was requesting it (or, rather, the box of ARCs it would be in) several months ago, I was interested in reading it because I like crime/mystery books. But, when I went to check it out again last week, the book just felt off to me. It felt kind of wrong to read it, mostly because of the shootings going on, and I didn’t know how this book would portray the shooting in the book and what would happen. Then I realized that I wouldn’t know unless I read it and that, if the book did make me uncomfortable while/after reading it, then at least I could let other people know. The final consensus is, I don’t know because my thoughts on the book and how the shooting was portrayed was kind of overshadowed by my thoughts about the diversity/stereotypes issues so I’ve realized I can’t really accurate/honestly separate the two and clearly tell whether I was uncomfortable about how the book portrayed the shooting, or if I was uncomfortable because of other issues etc. Overall, I’d say use your own judgment on the shooting part and know that the diversity part is eh.

Anyways, all in all, I didn’t hate the book but I also didn’t really care for it; there were quite a few things that bothered me but, again, it wasn’t the worst book ever. Also, it was ridiculously short which probably did not help in fleshing things out, but it was also nice because I finished it really quick. I probably won’t be reading it again and it definitely will not be the first mystery/thriller type of book I recommend (if you need recs for those, hit me up….there are a lot of awesome books!) Nevertheless, have you guys read Run, Hide, Fight Back* yet? If so, what did you think (be careful about spoilers!) If not, what do you guys think of the book, in general, just from the synopsis and review? Let me know in the comments below!