Hello everyone!! So, this past Tuesday, we went back to the wizarding world again, this time for the Fantastic Beasts: The Crimes of Grindelwald trailer! I’ve watched it sooooo many times since it released and analyzed the video plus a bunch of articles about it to finally come up with a list of references you might have missed AND think about some ideas/theories for what we’ll see in the film! Before we begin, though, here’s the trailer….

– the Ministry directly apparates onto the bridge of Hogwarts which, as we know from the Harry Potter films, shouldn’t happen as no one can directly apparate onto Hogwarts grounds. Therefore, it’s possible the no-apparation rule is created later, and probably due to the events of this Fantastic Beasts series (all the main characters in the wizarding world are troublemakers so it makes sense).

– the Ministry’s statement of Newt is “working under [Dumbledore’s] orders” is similar to in Harry Potter and the Order of the Pheonix when Harry created Dumbledore’s Army as a way to train the DADA. When the Ministry found out about the group, though, they accused Dumbledore of having started the group under his orders as an army against the Ministry. 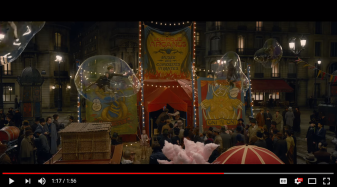 – Next on the list of stuff noticed is a name, Corvus Lestrange, that was written on some kind of wall in a sewer. Now, some people are saying that, because Leta and Credence’s names are written on the wall like a family tree, they’re thinking the two are related. At first, I was like NOPE how!? that doesn’t make sense but then I saw an HD pic on Pottermore and the detail is STUNNING and it does make sense now. What is also interesting is the person standing in front of the wall because, if you look at the jacket, it looks like Tina’s jacket but the person themselves look like they are a man who has dark, wavy hair and a grey hat. My thought? It actually is Tina or, at least, someone who’s close enough to her that their jackets would look similar. The other reason I think it’s Tina is that, in the first movie, we saw how she had encountered Credence before and cared for him, so, combining that with her investigative nature, Tina might be looking into who Credence actually is.

– There is one point in the trailer that shows three figures standing near a cliff and, though I have no inclination as to who they are, I did notice what is probably Hogwarts in the background. It could also be Beauxbatons (esp since I’m not sure if the scenery/setting matches up) but I feel like it’s Hogwarts. It’s not the biggest thing to take notice of, I know, but it was cool to see!

Who’s Back From The First ‘Fantastic Beasts’?

– Tina is back as an Auror, probably on an undercover assignment as she is alone most of the time (except when she’s with Newt at one point), is wearing darker clothes, has a different haircut and also I think a little darker hair, and, she looks more alert/wary.

– Queenie is back and looks to be in either the French Ministry of Magic or some new place in France that we don’t know about that also deals with beasts. As you can see in the picture to the right, there are a variety of beasts whose bodies are on the ceiling, kind of like what people do with stars, and their names are written in French below them. There is also a saying or motto written on one of the ceiling/wall panels (on the left and right): Hemisphae 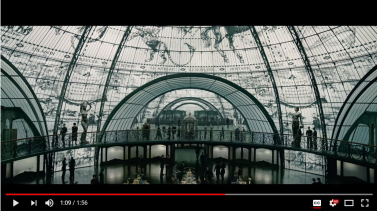 Latuma Sphaerum Rium Stel Starle Aequali Proportione. Now I’m assuming this is Latin but I don’t really know Latin so I’m not fully sure what it means other than something about hemispheres being of equal proportion. I put the saying into Google Translate and it wasn’t much help as it said basically the same thing. When I put it into Google, though, the main results that came up were about “De Divina Proportione” which, according to Wikipedia, is “a book on mathematics written by Luca Pacioli and illustrated by Leonardo da Vinci, composed around 1498 in Milan and first printed in 1509.” At first, I thought this was nothing BUT when you scroll down, there is a picture of the first printed rhombicuboctahedron made by

de Vinci. Why is this possibly important? Because it also looks similar to one of the things we see in Dumbledore’s classroom. Not sure if it’s a coincidence or not but it’s something interesting to note.

– Jacob is back as well as we see him with Newt several times in the trailer. In the last film, we saw his memories of the wizarding world mostly erased, however, we also saw he remembers a couple things judging by the way he acknowledged Queenie when she came into his shop at the end, and also that he has baked versions of various beasts. It is unknown how he got back into the wizarding world but he’s with Newt every time we see him, specifically in a dungeon-office like thing (probably Newt’s outside version of his beast-zoo case) with some new beasts.

– Credence: he is back with a fresh haircut – instead of the bowl-cut we saw in the last film – and dealing in some kind of new magic as we can tell from the thing that came out of his hand at one point in the trailer. Personally, I think what came out of his hand is some part of his Obscurial and he’s somehow mastered/transformed it. Also, he’s seen with a woman on the top of a roof – who, as we know from previous teasers is a

Maledictus (I’ll talk more about her later) – where he shows her the thing coming from his hand and is also seen in one of the circus tents of Le Cirque Arcanus. From the interesting way the witch is dressed, and how Credence looks in both scenes, I think Credence is traveling alongside the circus (having left with them from New York to Europe) and the witch is one of the people in the circus he’s befriended.

– Newt: As we can see, he has been sucked into fighting against Grindlewald, however, at the moment, G is supposed to be locked up so Dumbledore’s “I can’t move against Grindelwald. It has to be you.” is interesting and means G is probs out again and doing something. Also, Dumbledore probably can’t “move against” Grindelwald because he’s probably in position to become Headmaster and maybe doesn’t want to put that in 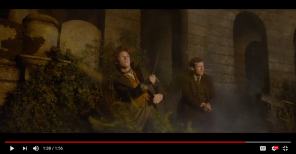 jeopardy. We also know that there are new beasts and we are introduced to them in some kind of dungeon/office thing which, as I mentioned above, looks similar to Newt’s beast-zoo inside his case. Lastly, we see Newt with what is probably his older brother in a cemetery fighting against something and using their combined power to create a break in the ground. 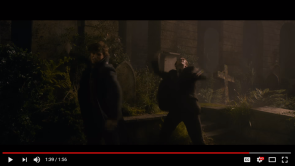 I honestly have no idea what it means because I can’t recognize the cemetery (no, it’s probs not the one in Harry Potter and the Goblet of Fire where Voldemort was raised once again) soooooo ?????

Who Are The ‘New’ People?

– Dumbledore is not the Headmaster at Hogwarts yet. He’s actually a Transfiguration teacher, however, the room he’s in in the trailer is actually the Defense Against The Dark Arts (DADA) room we saw in the original Harry Potter movies. Something interesting is that, 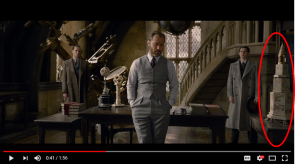 at :44, when Dumbledore is talking in his classroom, we see a little tower like thing to the right, and, if you look closely, the top looks like a replica of the Astronomy Tower and it actually says on one of the levels “Astronomy Tower”. I’m not sure why there would be a replica of it in Dumbledore’s class but it’s there! Also, by now, he has made the Deluminator by then which is the device he used to take out and return the lights, which he later gave to Ron. TBH, the scene at :26 when the Deluminator is used looks like a nod to the opening scene of Harry Potter and the Sorcerer’s Stone when Dumbledore, McGonagall, and Hagrid dropped baby Harry at the Dursley’s house.

– There are two brothers (probably twins) in the trailer who we saw are riding in a carriage with thestrals, from some building. TBH they remind me a little bit of Fred & George and I wonder if they are of the Prewett line (which was Molly Weasley’s maiden name before she married Arthur Weasley) Now, I have two ideas of where they are from:

– Leta Lestrange was seen in a typical 20s flapper outfit in the midst of some ball, probably in Paris or in France in general. We know that she was a love of Newt’s and the reason he got kicked out of Hogwarts AND that she is currently engaged to Newt’s older brother Theseus. I’m not sure why Leta is in France but she’s probably working for the French Ministry or something.

– As previously mentioned, there is a new character who is a Maledictus who we see with Credence in the trailer.  Being a Maledictus means the witch has a blood curse that ultimately will turn her into some sort of beast. My thought is that the witch and Credence bonded due to their unusual curses/abilities and that Credence could be looking into if he’s cursed maybe. Also being discussed is that the witch is Nagini as the witch looks similar to a picture of a woman surrounded by snakes in Le Cirque Arcanus, and that, since the witch is a Maledictus, Nagini is the beast she will turn into. I’m not sure how I feel about this theory as it feels like there are too many obvious clues for that to be true. As well, from what has been discussed on the internet, Nagini is either a magical version of a king cobra or a viper and king cobras typically tend to live around 20 some years maximum. There have been other snakes who live to over 50 however that seems a bit uncommon and only for specific snakes, I believe. As we know/have seen from the HP books and movies, Nagini is a full-grown snake and died in 1998 during the Battle of Hogwarts. In Fantastic Beasts, we can tell that the witch looks to be in her late 20s-ish (probs around Credence’s age) and Fantastic Beasts takes place in the 1920s. What we don’t know is if a Maledictus, when they become a beast, also takes on the beast’s lifespan OR if they have a human-like lifespan and live for longer than normal (for a magical creature). That question, it seems, could be the make or break for the “the witch with Maledictus is probably Nagini” theory.

Anyways, that’s all for the references and theories. It’s been interesting to come up with them and think about them over the last couple days because, as new things come out and people discuss them, my ideas have changed which is definitely fun and surprising. Now, tell me, what things/people did you notice in the trailer? Do you have any ideas or theories? Let me know in the comments below!! Thanks, have a great day/night and tata for now!!