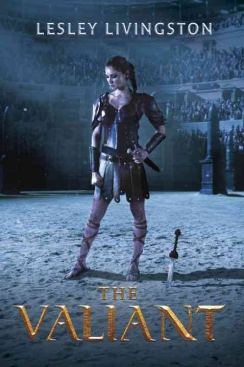 Hello everyone!! So today I am reviewing The Valiant* by Lesley Livingston! It comes out February 14th but I got an ARC of it from a trade and read it near immediately! Of course, reviewing has been a different story what with life getting in the way but I’m here now to tell you all about The Valiant* and why you kinda sorta really do need to read it! Before I start my (non-spoilery) review, here’s the synopsis via Goodreads:

The youngest daughter of a proud Celtic king, Fallon has always lived in the shadow of her older sister Sorcha’s legendary reputation as a warrior. But when Fallon was a young child, the armies of Julius Caesar invaded the island of Britain and her beloved older sister was killed in battle.

On the eve of her seventeenth birthday, Fallon is excited to follow in her sister’s footsteps and earn her rightful place in her father’s royal war band. But she never gets the chance. Instead, Fallon is captured by a band of ruthless brigands who sell her to an exclusive training school for female gladiators—and its most influential patron is none other than Julius Caesar himself. In a cruel twist of fate, Fallon’s worst enemy, the man who destroyed her family, might be her only hope of survival.

Now, Fallon must overcome vicious rivalries, chilling threats and the dangerous attention of Caesar himself to survive the deadly fights that take place both in and out of the arena—and claim her place in history among the Valiant.

Okay now for the review:

Overall, it was a pretty awesome read and I definitely suggest you read The Valiant* when it comes out!!! Now, do you read historical fiction often? If so, what are some books I absolutely have to read??? Let me know in the comments below! Thanks, have a great day/night and tata for now!!

5 thoughts on “The Valiant by Lesley Livingston – Review”