Hello everyone and welcome (back) to Avid Reader! So last Saturday I made a reaction post on some of the biggest news we’ve heard on the new Shadowhunters TV series: production was starting in May (in Vancouver) and casting calls were made (including general descriptions of the characters). Now many (yes, me included) freaked out due to something else as well: the characters were being aged up (I still can’t get over the fact that Simon is going to be an accountant student). I come here now again because fans got some new surprises as well (though they haven’t been fully confirmed yet). Here’s a picture of what I’m talking about: 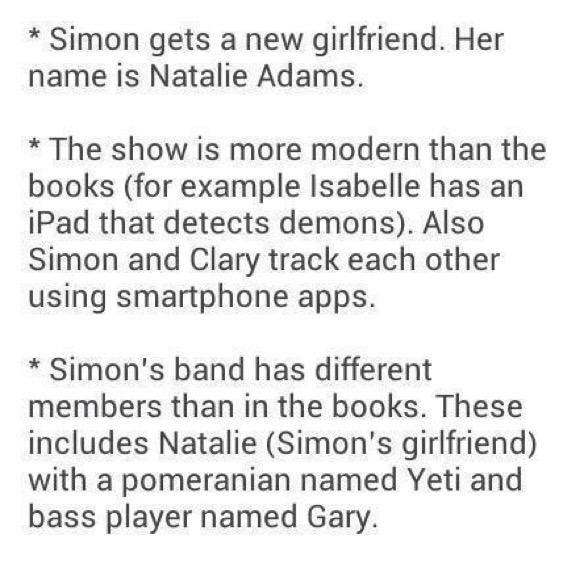 I’ll wait a minute while you scream in frustration….*one minute later* Now do you understand my thoughts and feelings? I love The Mortal Instruments and I can’t wait to watch the TV Show but this isn’t The Mortal Instruments at all. What this is is something more techy than fantasy…more lovey than angsty and this is going to mess up the entire plot/characters’ feelings and relationships. I’m not kidding. Mentally go through the plot lines in the series and the relationships (like how they started and ended) and you will realize it really is going to be a mess and nothing like the books at all. This, to be honest, is going into Percy Jackson Movie Realm (they messed up quite a lot of details/plots/characters) and like The Percy Jackson movies, no fan is going to like them as a book-to-movie (or TV Show in this case).

Now @ABCFamily* may still say “It doesn’t need to be accurate though to be a good show and gain many viewers.” They are absolutely right but they are also very wrong. The less accurate you get, the less viewers you will get who were fans of the book series and there are a bunch of us. I will tell you right now that there will be a huge dent in the show’s viewership without even half of the fans of the book series. This is not meant to sound arrogant, it’s merely true.

Thus, I very much hope that those three “developments” above in the picture are merely rumors because you’ve already aged up the characters and that stirred up many feelings within the book’s fan base. Please don’t do anything else to change the series. Fans loved the series as it was before the show so there really is no need to change it up.

That’s all my thoughts right now. I would love to hear your thoughts (esp. your reactions to the developments) and see if I’m right/wrong in my thoughts/(evidence based) assumptions so comment below! Thanks, have a great day/night and tata for now!

*Note: Just wanted to let everyone know, I really do love ABC Family and watch many shows/movies on their network so if I sound like I just am bashing them (which I’m not trying to do at all!), know that I don’t feel that way at all towards them. Again, I love their network and the shows/movies on it so no hard feelings here.